I was born in San Francisco. When I was fourteen, my family relocated to St. Paul, Minnesota. I graduated from Highland Park High School in St. Paul and later spent time working in the printing industry. I moved to Douglas, Wyoming, where I worked in a small quick-print shop until I was hired to manage the movie theater in Ogallala. After the theater closed, I decided to attend college at the University of Nebraska at Kearney where I earned a BAEd in Music Education. I was employed for two years at Sumner-Eddyville-Miller before I was hired by Kenesaw Public School, where I have been ever since.

I live in Kearney and enjoy reading Science Fiction and podcasting (I am currently on three shows including The Orbital Sword Podcast, The Babylon Project Podcast, and the Bound By Honor podcast which I produce and edit). I also write Jim’s Sci-Fi Blog in which I write about Books and Movies. I collect autographs through the mail and have many autographs from famous figures in Science Fiction. I also enjoy bicycling, playing tabletop board games and attending Sci-Fi conventions with my daughter, Chrissy.

Employed with Kenesaw Public Schools since 1999.

Back to Teacher and Staff Directory 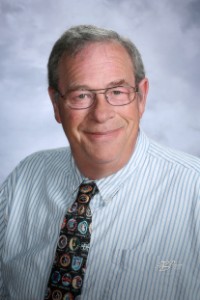